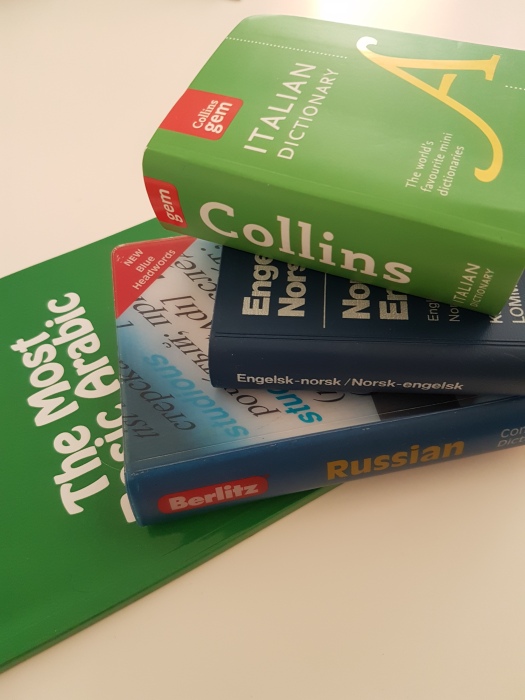 I love language. It makes me endlessly curious. I like the feel of it on my tongue, the sound in my ears, even the sight of it written down. And yes, it even tastes different.

I have encountered quite a few by now. Norwegian is my second language. This has given me access to two other Scandinavian languages, related, but each with their own unique flavour. I’m intrigued by the differences I notice whilst viewing the crime series which are done so well here in Scandinavia.  Swedish tends to imprint on the ear an almost petulant tone with its rise and fall….something I often detect in Russian. Although there are similarities in vocabulary with Norwegian,  Swedes either pronounce them differently or introduce a set of completely new words. There are also sounds which are unique to Swedish. I remember my early days in the orchestra, green and knowing little Norwegian. Imagine my shock when the conductor of the week began taking the rehearsal in Swedish with a strong Finnish accent! I later learned to recognise this, but it was proof that Swedish was easily understood by Norwegians. And then there’s Danish….

Danish has been unkindly described as sounding like Norwegian spoken with a mouth full of hot potatoes. And it has to be said – sometimes it may sound rather as if someone just coughed when actually it was a question! It is less distinctly enunciated than the other two languages, the words full of glottal stops. It’s a popular joke to present the unwary with tongue twisters like “Fem flade flødeboller på et fladt flødebollerfad ” – (five flat cream buns on a flat cream bun plate). I know. But if you hear it in Danish, the tongue gymnastics are impressive. If you can get your mouth around that phrase, you are doing well! There’s definitely something charming and cosy about Danish to me … a sense of their famous hygge. Devotees of the series “The Bridge” get to experience interchanging Swedish and Danish, and can appreciate the beauty and differences in both. Thanks to my preference for crime series, I’ve reached the stage where an absence of Norwegian subtitles won’t prevent my understanding.

I learned French and German at school and understand both pretty well, thanks to my international colleagues and the very useful Netflix, which offers up films and series in so many languages. And here I’ve become aware of how much a given language colours and affects the pace of a film. After the constant barrage of sound – spoken and music – predominant in many current American films (there are many lovely exceptions, notably older movies like On Golden Pond), I find myself drawn to French productions. They really use silence as a language. They don’t feel the need to fill up every meaningful space with aural pollution. It is often left up to the viewer to join the dots – you have to engage and watch with active brain. The French consider the viewer astute enough to work it out. I love the sound and feel of French, the way it immediately alters your facial features. And in come those Gallic shrugs. The same person is altered, absorbed into a new persona, according to the language spoken. There are some amusing examples of this on YouTube, with people saying the same word in a host of different languages.

There are usually conversations going on in German at any given time in my workplace. Which helps me keep my ear in. I enjoy German most of all in a poetic sense, used sensitively in music. In opera or song, a composer has the added responsibility to set words in such a way that the full beauty of word and music is mirrored and revealed, enhancing each other. Richard Strauss achieves this in his Four Last Songs, settings of poems by Hermann Hesse and Joseph von Eichendorff. I don’t think I’ve ever experienced a finer mesh of the German language and music. The soaring result is sublime.

Yes….this was actually a leaflet I found in Italy. The “& gestures” amused me greatly. But it’s true that Italians use gesture much more than British or Scandinavian speakers. Sitting at an outdoor café in Lucca this summer, I was fascinated to observe people from a distance, unable to hear, but certainly getting a few descriptive clues from the gestures. They are a true extension of the voice. I can read and understand a good deal of Spanish and Italian, and it’s enough to get around with, although I’m not up to flowing conversation yet. In my early teens, I discovered opera. My preferred method of listening would be armed with the libretti. So my early knowledge of the Italian language was largely based around sighs, traitors, love, broken hearts, fine eyes…and the phrase, “are you crazy?!”  I watch films and series regularly in Spanish, with Norwegian subtitles to check my understanding when it goes too fast! I could listen to – and watch – Javier Bardem speak all day…. Maybe it is my musical ear that makes me particularly sensitive to the cadence of language.

A new language is like a code to be broken. Links to be found. Roots to uncover. In the far North of Norway live the Sami, traditionally nomadic, following their reindeer herds.  They have their own TV channels, proudly nurturing and maintaining the Sami language. I sometimes listen in. Sami has a softness around it that rolls from the mouth like mist. It sounds very much of the Earth, timeless and in tune with the vast landscapes. The softening of edges remains evident when they speak Norwegian,  much like that of Gaelic speakers when reverting to English.

A few years ago, I learned the Russian alphabet. Cyrillic is at first confusing, because a few common letters remain but are used in a totally different way. I must have absorbed more than I realised because I find I read signs or anything that pops up in Russian without thinking. My brain soaked up a fair amount of vocabulary whilst watching Russian news programmes. I picked up enough to register the interesting variations in interpretation of the same world news item compared to British or Norwegian news channels! A lot of thriller series I enjoy contain Russian characters and I get some fun out of recognising some of their spoken asides. It comes in handy when exploring other countries too. A stroll around Prague, for example, showed me that some Czech words were familiar even without the Cyrillic.

Threads are evident throughout Europe between certain language groups. The exceptions intrigue me. Hungarian has no such obvious links and I was reduced to guesswork. As in every country I visit, I made the effort to learn a few basic words but much of it remained beyond me. I noticed some evident and mystifying translations such as this one on a building. Sounds like something out of Harry Potter! 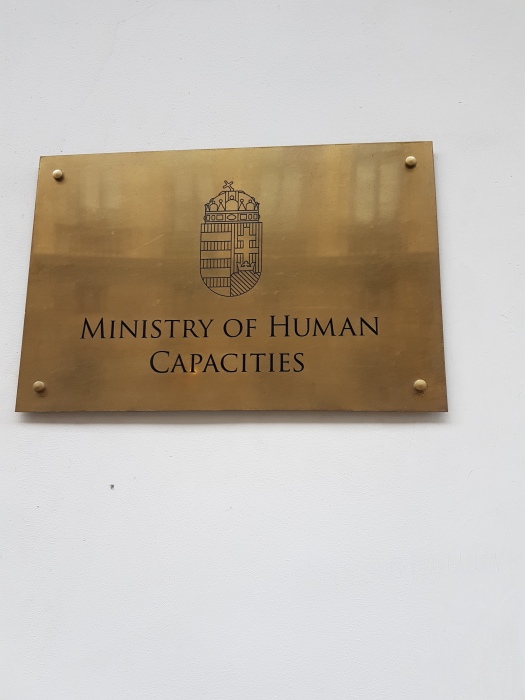 I admire every effort to preserve a language or dialect. Every attempt to reach out and try a new language is similar to wine-tasting. How does it feel on the tongue? What does it make you feel? From here in the chilly North, Spanish and Italian conjure up those lazy summer evenings where ones fluency evolves with each refilled glass. Such language can be voluptuous, languid, rich with that Mediterranean mañana feeling. And then there are the arguments. Spanish at full speed is quite an experience. And in both Spanish and Italian, the creativity of insults cheerfully hurled out of the window whilst driving are impressive.

There simply isn’t enough time left on this Earth to discover and learn everything that interests me. But I’m certainly making the most of my Now. With a mind that darts around like a butterfly, I have no choice! I watched a series in Welsh, of all things. They are proving adept at those dark, Scandi thrillers. I was sufficiently intrigued to look up a few basic pronunciation rules. I’ve also taught myself a few words of Arabic which is after all an important world language, even more so here in Europe. Being able to recognise and respond to some basic phrases can only be valuable and shows respect. I fear yet another new alphabet and script will be beyond me though!

What I already have on my plate is the perfect brain health workout. Appropriately enough because, as a musician, one never stops learning. How colourful is our world! Music is a plethora of languages. And at the same time, one unique, common language which rises above borders, race, religion or politics. How amazing is that?! Music is heard. Music is felt. Whether or not you speak someone’s language.