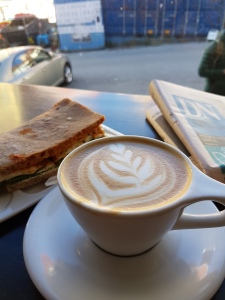 I may have mentioned that it rains in Bergen. A lot. An average of 239 days per year, according to some sources. Rain is practically an art form here. It takes itself seriously. Illustrated perfectly by the many umbrella corpses sticking out of waste bins around the city. The ones that didn’t make it. Few umbrellas survive intact for long. Neither is it worth spending too much energy hunting for the perfect rain gear. This rain is going to find a way in. Up a sleeve, down a neck or – when it appears to rain horizontally – straight into your face. In winter this counts as a free dermabrasion.

There’s a saying: there’s no such thing as bad weather, only the wrong clothes. To get wet is a part of life here – so why not embrace it? Invite it into your life.  Show a little love. Celebrate with bright spotted wellies. Time to get in touch with your inner amphibian. Umbrellas become part of the decor here, hung en masse to provide a colourful canopy above a local restaurant in summer, or used as a kind of street art. The expression “it’s raining buckets” is used, but also, intriguingly, “det regner trollkjerringer” (it rains troll hags). Faintly disturbing. Then there’s the onomatopaeic rain that splashes down – “det plasker ned.” The landlady of a B and B where I was staying in Scotland was telling me of her day spent gardening in the rain – ” Oh but it wasn’t WET rain,” she charmingly protested. Bergen rain, on the contrary, is definitely the wet kind.

As this soggy climate has become my home, I have worked on finding the positive side to it. Bergensers (including this honorary one) are adept at making things “koselig” or cosy. Like the “hygge” made famous by the Danes. Norwegians just kept quiet about it. Simple candles transform an overcast or stormy breakfast, before splashing off to work and school. And we have an endless selection of cafés in which to take shelter and gently steam. Each with their own character and speciality. Unlike that speedy espresso consumed standing up that is so typical in Italy, I prefer the measured calm in my favourite haunts. There’s a reverence in the way my order is processed. The cup handled with precision, the frothy cappuccino delivered with pride. I occupy a window seat and savour. I also notice that the tourists are a particularly hardy bunch. Despite a particularly vehement deluge, a long group glides past on a Segway tour, apparently all enveloped in bin liners. I salute their determination from the depths of my coffee heaven.

Music can be enjoyed in any weather. The Bergen Philharmonic Orchestra, or BFO, presents free outdoor concerts every August. Come rain or shine. Generally, it rains. It’s a kind of tradition. And then there’s the wind. For which we are issued clothes pegs, valiantly trying to control flapping music pages. At least usually the stage roof doesn’t leak. I once played open air opera in Trinidad. Bats swooped in at awkward moments, and a unique problem was caused by the oversized insects which decided our music was the perfect place to bask under the hot stand lights. There was much comical slashing with bows between notes to move them off that tricky section at bar 125. During a sudden torrent of rain, the timpani made an unscheduled entrance. An umbrella was hastily provided.

We will not be fighting off moths the size of dinner plates in Bergen – I hope. But we will be providing two rousing performances, hopefully to a sea of umbrellas. Every year, I’m impressed by the enthusiasm of our audiences out there, filling the plaza with a rainbow of wet weather gear. Musicians feed on such enthusiasm. It’s a two-way thing between us and the audience. And it’s addictive.

I’ve included in my Menu links to both BFO and our regular livestreams, Bergen Phil Live – which means we can be enjoyed even if you can’t visit us here in Bergen. We are currently preparing for another tour, including an appearance at the Proms. Meanwhile, for anyone in Bergen – come along to hear us this week on Thursday and Friday. Better bring that umbrella too!

One Reply to “There’s no such thing as bad weather…”